The Power of Perception

While many people find the story amusing, not everyone understands the point. The fact is we are all blind men. We so often make decisions without having a full understanding of the problem.

Edward de Bono developed some thinking tools designed to broaden a person's perceptual screen. To experience more of the elephant. I recently shared these tools with Renaissance Executive Forums. Take a look at the mind map below and tell me what you think. 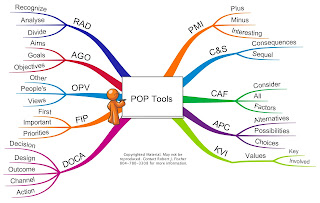