How to Fix Congress 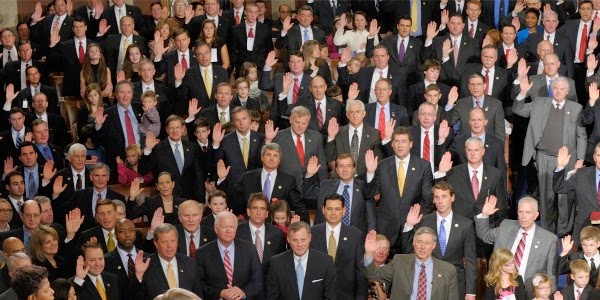 I have an idea that I think would fix Congress. The problems are obvious to everyone. Congress continues to be beholden to special interest. People and organizations with lots of money can buy access and influence, and laws are designed to protect the wealthy and powerful.

It takes lots of money to get elected to Congress. It's a great job with a fat salary, a generous pension and superb fringe benefits, so once they've done all the work to get elected, congressmen and senators normally want to stay there. So their primary job becomes getting reelected, which means they frequently need to vote a certain way to keep the support of their party - and their jobs.

The problem is not with the people who are elected to Congress, who for the most part are good people. The problem is with how the money corrupts them. So let's eliminate it.

My solution? I think we should select Congress by lottery. All college graduates over the age of 25 would be eligible for the lottery. All one would have to do is pass a basic civics test and be willing to serve four years. People could only serve once in a lifetime.

Instead of a bunch of lawyers, Congress would be made of school teachers, salesmen, doctors, businessmen, corporate executives, stay-at-home parents and tradesmen. In other words, it would look like America. Only people who really cared about America would be willing to leave their careers for four years to serve the nation.

It might sound silly, but is this not the exact system that we use to seat juries? And don't we trust juries to decide things as important as taking away people liberties - or even their life?

We would still elect our President, who could veto congressional action subject to the override with a two-thirds majority. I'm confident that a random selection of patriotic people who cared about the nation could do a much better job than the people who are beholden to special interests.

Let me know what you think.

Bob, I like your idea, but in case that can't be enacted, how about getting a grass roots effort to get andamendment to require term limits? I think this would go a long way to reduce the need for raising money for the next election.

Good Idea. But, lets also get a grass roots movement for an amendment to allow for term limits.