The Virginia Thinking Institute is Endorsing Robert Sarvis for Governor

Robert Sarvis is clearly the best qualified candidate for Governor of Virginia. Sarvis is a 37-year-old businessman with degrees from Harvard, Cambridge, N.Y.U. and George Mason University. He is married with two daughters and his wife is a pediatrician. I had the opportunity to interview him today; you can listen to that interview below.

Unlike Terry McAuliffe, Sarvis understands the damage that crony capitalism does to the fabric of our nation. While McAuliffe, a Washington insider, has made no secret of his belief that business and government go "hand in hand," Sarvis knows that when government makes special provisions to support one taxpayer (like the special tax breaks that McAuliffe sought for his car company), all the rest of the taxpayers suffer. Unlike McAuliffe, he would fight against cronyism instead of actively promoting it.

Unlike Ken Cuccinnelli, he is not an ideologue. He understands that in a diverse nation we will not agree on everything and fighting over unanswerable questions will only polarize us rather than bring us together. 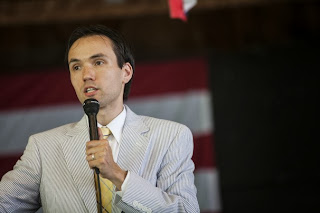 Sarvis understands that we must place restrictions on governmental power. More than any other candidate, he wants to protect our freedoms of choice and privacy and limit the coercive powers of the state. And he favors sensible tax policies and giving parents and teachers a much greater say in the education of their children instead of centralizing education authority with bureaucrats.

On November 5th, we can vote for more of the same. Or we can vote for a visionary who understands what Virginia needs to more forward. If you visit Sarvis's website and contrast his positions with the other two candidates, I think you will see that he has the best ideas for our state.

The Lady and The Burqa 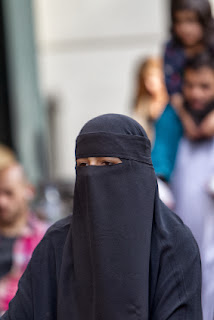 On a hot day recently I saw a woman covered head to toe in a burqa. Only her hands and eyes were visible. I couldn't help but think what a terribly inconvenient way to dress. It must be rather uncomfortable and no doubt leads to social isolation in countries where Western dress is more common.

So why did she dress this way? I suspect that at some point in her life, someone taught her that this was pleasing to God.

I wanted to reach out to her and tell her that she didn't have to dress this way. Whoever told her that dressing in this "fashion" was pleasing to God was just promoting one more untestable theory about religion.

But I remained silent. Social convention told me it would be rude to speak to her and that I needed to be tolerant of other people's beliefs.

I wish I had spoken to her though. I wish I had told her that many woman love God, yet dress in a much more comfortable way. I wish I had encouraged her to think for herself and decide if she really believed God wanted her to dress this way, or if she was just doing this because somebody had told her she should.

As thinkers and decision-makers, it seems that we should carefully examine all of our beliefs, especially those that are almost inordinately inconvenient to comply with those who cause great suffering. More on this in the next blog post.

The 36-Year-Old Virgin and His Religious Beliefs 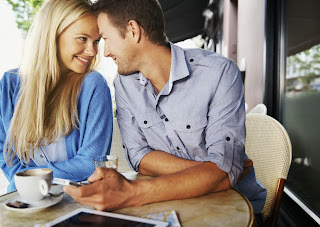 A friend of mine is a 36-year-old virgin. He is very lonely and frustrated. He would really like to be married, but it just hasn't worked out for him.

There's nothing wrong with my friend. He's a nice looking young man, educated, fluent in two languages and a sharp dresser. He was enormously successful in his field before he gave up his career to be a missionary in a foreign country. I think many young women would find him a suitable mate and he desperately wants to get married. So why is he still single?

My friend believes he was called to do missionary work, so he volunteered for a mission to spread the Gospel in a foreign country. Also, he strongly believes one should wait for marriage to have sex. He very much wants to marry a virgin who shares his beliefs. And he strongly believes that God will put that person in his life.

And this is where I believe his thinking is flawed. First, because he believes God will put that person in his life; he doesn't do anything proactive to meet that person. He doesn't network through friends or put himself online or seek opportunities to meet suitable women. To my way of thinking, he has left the "heavy lifting" up to God.

I'm sure I'm going to get hate email for saying this, but at 36 the number of age appropriate virgins that share his faith and would be interested in him is a dwindling number and a very small subset of the total number of woman who would otherwise be suitable for him. By continuing to wait for the man upstairs to put this beautiful God-fearing virgin in his life, he misses the opportunity to accomplish what he really wants, which is to fall in love and have a life and a family with someone who shares his faith.

My friend is a noble but sad individual. In a strange way, his religious beliefs have caused his thinking to be flawed in the same way that E. W. Jackson's beliefs have contorted his thinking. He has developed his theories about God, ("If I do the Lord's work, he will give me my heart's desire") and lives as if these were laws and not theories, which seems to be preventing him from achieving his most cherished goals. 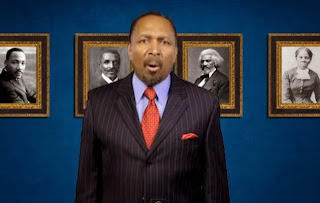 This is the first in a series of (admittedly) provocative posts about thinking and religious beliefs. After Bishop E.W. Jackson, the Republican candidate for Lieutenant Governor, said that if you didn't follow Jesus, then you "are engaged in some sort of false religion," I knew that I just had to comment. The next several posts are designed to promote better thinking about religion and not to be critical of anyone's beliefs. But they will be critical of people's thinking about those beliefs.

Biology, cardiology and even the soft science of sociology all have testable theories. We can make observations and draw conclusions, and we can test those conclusions. These testable conclusions form knowledge. For example, biology tells us that for most species, you will need a male and a female to reproduce. We can put two male rabbits in a cage and test this.

What can we test when it comes to theology?

Which means that the word theology is really a contradiction in terms. Theology is not the study of the science of God. When it comes to God, what we have is faith. But faith is not "testable" in a scientific way. We really don't have any true knowledge of God. We just have a lot of theories. Granted, a lot of good thinking has gone into some of those theories, but they are still theories and not knowledge.

And this is where Mr. Jackson's thinking has become blurred. He has confused his knowledge and faith and this has caused him to make some poor decisions. Surprisingly, as we will see, the mistake Mr. Jackson makes is quite common among the religious faithful.