The 28th Amendment to the Constitution: Guaranteed Health Care for All 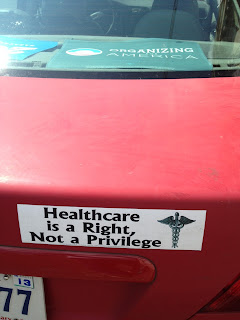 I saw this provocative bumper sticker on the road recently, and I thought it was a useful idea for illustrating some thinking tools. Provocation is one such beneficial tool for generating new thinking. Go ahead. . . say something outlandish and see where it leads you!

As alluded to in the picture, health care is of course, not a right guaranteed by the constitution. But what if it were? Let's use this bumper sticker as a PO (PO is short for provocative operation, saying something that doesn't make sense in order to see where it takes you).

Let's say that Congress has passed the 28th Amendment to the constitution that says, "All Americans are entitled to receive necessary health care regardless of their ability to pay."

So what happens next? Without funding the amendment, people all across the county would go to doctors and demand treatments without paying for them. Fearful of lawsuits, health care providers would meet these requests, but quickly realize they have no way to pay for all the increased costs and quickly start to go out of business to avoid bankruptcy.

Congress could not allow this, so they would have to provide funding and decide what constitutes basic health care. Legislators would have to decide who got what treatments and how much the government would pay for these treatments.

And this is why health care as a "right" is different than all other rights. Because all the other rights restrict the power of the government and protect individual liberties. That's why you have the right to remain silent, you have the right to a speedy trial, and the right to a jury of your peers. Without these constitutional guarantees, the government could throw you in the slammer without charging you with a crime and leave you there until you confessed.

If free health care becomes a right ("free" meaning that it's free for some people and our government confiscates money from others to pay for it) then it's the only right that empowers government at the expense of individual liberties.

While you have the right bear arms, if you cannot afford a gun, the government doesn't issue you one. And while you may have freedom of speech, the government will not pay to print hand bills or produce radio or television advertisements for you to express your ideas.

I would be in favor of an amendment that guaranteed people equal access to health care regardless of their race, sex, religion, sexual orientation or anything else. But it's not necessary in this country because everyone already has equal access. But a right to free health care is just another way to extend the power of government at the expense of individual liberties.

What do you think of provocation as a thinking tool? How would you use it in your daily life to think better?