How Can We Make Our Government Work Better?

I love the holidays. During this time of year, I'm reminded of the story of the young bride who was making her first Thanksgiving turkey. She bought a nice turkey and prepared it exactly as her mother had, removing the thighs and drumsticks before cooking the rest of the bird whole. When she placed the fowl on the table for her new husband, a turkey leg man, he inquired as to why she had removed the dark meat before cooking the bird. She replied that she had cooked it exactly as her mother had for every Thanksgiving. That's when her mother explained that the pan she used to cook her turkey was especially small and so she couldn't get a whole bird into the pan. This is why each year the young bride had cooked it in such an unusual way.

The national debate over the fiscal cliff and the pending tax increases reminded me of this story. There is so much waste in our government from doing unnecessary things, that I'm sure we could easily balance our budget just by eliminating unnecessary programs and wasteful policies.

Edward de Bono created a tool called Challenge which was designed to help organizations identify wasteful, unnecessary, or inefficient ways of doing things. I thought that I would apply the tool to show how we could make our government work better. 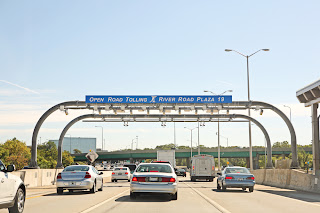 One of the easiest things our government could do to make life better for its citizens is to eliminate toll booths. Would anyone be sad, if they never had to pay a toll again? Toll booths waste our time, they cause accidents as people fish for coins, and they serve no useful purpose.

Yes, I know that we need the revenues to build and maintain the roads, but wouldn't it be more efficient to collect those revenues as part of the gas tax? Who wouldn't pay a couple cents more at the pump to never have to wait in long lines during rush hour just to pay a toll?

And yes, I know that toll booths employ people, but if a government job can be replaced without any disadvantages to the citizens, then isn't it a make-work job? If we could eliminate all the make-work jobs and get people working in productive jobs, producing goods or services that people wanted to buy, wouldn't that be good for the economy? Why didn't we hear about that during the months leading up to the election?