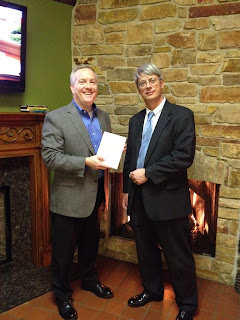 I recently attended a talk sponsored by the Chesterfield Chamber of Commerce featuring Daniel Murphy, the founder of the highly successful Growth Coach Franchise, which provides business and sales coaching services. Dan has built his business into a nationwide network of more than 150 franchisees that are helping 5000-plus business owners across the country achieve more success in business AND obtain more quality time with their families. Throughout the talk, Dan repeatedly emphasized the importance of thinking in creating a successful business. Since he started The Growth Coach, he has adhered to a weekly discipline of taking time to think intently about his business.

Dan is a lateral thinker. In his talk, he made reference to two lateral thinking techniques that students of Edward de Bono's work will recognize as "random entry" and "provocation." He uses a packet of cards with quotes from famous people as well as a series of provocative questions - similar to Roger van Oech's "A Whack on the Side of the Head" - to help businessmen and women enter problems at random points and advance their thinking.

In his book "Becoming a Strategic Business Owner," Dan also advocates another thinking principle called "simplicity," which de Bono has written about extensively.

I had a good conversation with Dan at the reception that Mark James, chairman of the Chesterfield Chamber of Commerce, was kind enough to sponsor at his local business Home and Hearth (where, incidentally, I learned a tremendous amount about how to save money on home heating!). Dan said he had heard about de Bono's work but had not yet attended any of his classes. I often find that highly successful people like Dan are compelled to do extraordinary things to stimulate their thinking. They are frequently amazed at how powerful the full complement of "thinking tools" are.

Speaking of, I am forming a new "Six Hats Thinking" class that will be conducted on the afternoons of March 1st and 8th, 2012 at the headquarters of AVCOM of Virginia. Send me an email at bob at thenakedportfoliomanager.com if you would like details.

Bob, thanks for the kind words. It was a pleasure meeting you and getting to know you. You are clearly passionate and knowledgeable about thinking effectiveness. I enjoyed your additional posts on your blog. Continued success spreading the word about the most underutilized and underappreciated resource we have...our MINDS and our ability to THINK. All the best, Dan Murphy