What We Can Learn About Thinking From 16th Century Spaniards

I just got back from Mexico where I had a chance to visit the Mayan ruins of Tulum and learn about the local culture.

The Mayan's were a very advanced people. They mastered astronomy and architecture, and developed their own writing and mathematical systems. Among other things, they developed a sophisticated calendar that predicted the exact position of the planets hundreds of years in advance. The picture below is a structure that rests on the east side of the walled city of Tulum. 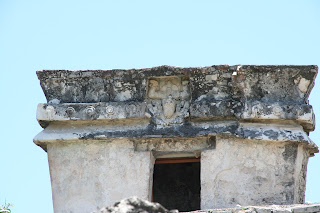 If you look closely at the top of the structure you will see what looks like an upside-down head. What is amazing about this structure is that on the equinox, as the sun rises over the horizon in the morning, the entire structure casts a large shadow. However through the tiny opening in the mouth, a beam of light passes. That beam of light illuminates a large spiritual statue a few hundred yards away.

This edifice was built over 1,000 years ago, yet the people were able to predict the exact time of the equinox (the day of the year when daylight and night time are equal) and construct a building that emphasized the sun's light in an exact way. An amazing feat!

Of course, when the Spanish landed in the Yucatan, they were not looking to find a sophisticated people who could teach them about astronomy, agriculture, and architecture. They assumed that the indigenous people were an inferior race and they set about exploiting them.

The Spaniard's thinking error was to look only for reasons to support their preconceived ideas. They expected to find an inferior race. When they saw the Mayan people, it was easy to justify their original impressions. The Spaniard's had superior weapons (gun powder). They were better at navigation and ship building and metallurgy. Besides that, the indigenous people looked different - a sure sign of inferiority in the Spaniard's eyes.

In "The Naked Portfolio Manager," I call this type of thinking error confirmation bias. One way to combat it is to actively search for reasons in which your preconceived ideas are incorrect or incomplete. Had the Spaniards done this, many of the atrocities that were visited on the Mayan people might have been avoided, and the thousands of Spanish soldiers that were killed in retaliation might have been spared. Alternatively (if it had been invented then), the Spanish could have used The Six Thinking Hats method and developed a more effective method of dealing with the native people.

Like the Spaniards, many of the things we believe in are either false, partially false, or are incomplete. Using a defined thinking strategy is the best way to avoid the pitfalls that can occur from poor thinking.